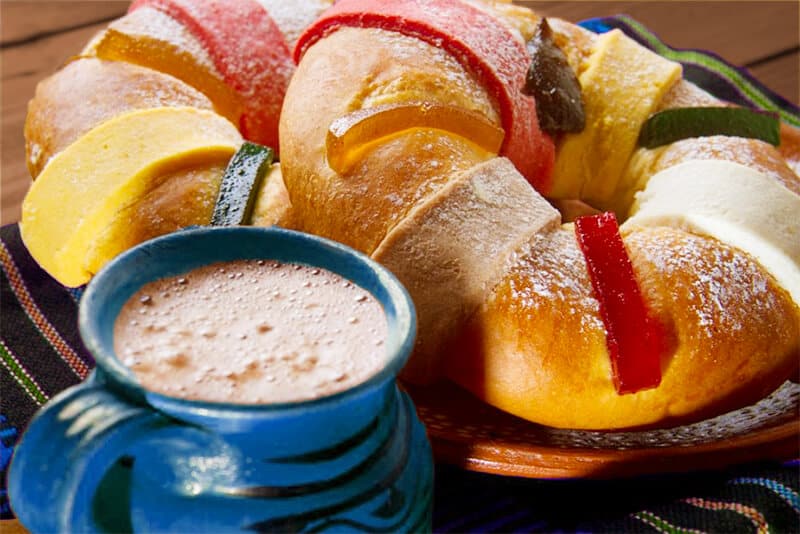 Tamales are a staple food during Christmastime in Mexico.  A traditional tamale is made from masa, a dough made from ground corn, and then filled with pork, chicken, veggies, or beans and cheese.

This is a soup made from pork or chicken with hominy, onion, chile peppers, radishes, cabbage, avocado, salsa, and limes.

Pavo is a Mexican turkey recipe where the turkey to be roasted and then served in a mole sauce.

This salad varies depending on who makes it, but it typically has lettuce, beets, carrot, apple, pineapple, jicama, and pecans or peanuts.  This is typically served at dinner on Christmas Eve.

Bunuelos are fried dough in the shape of a tostada and then covered in sugar and cinnamon.

This bread is served on King’s Day (Die de Reyes), which is how it got its name.  Even though King’s Day isn’t until January 6th, you can find this treat as early as Christmas.  Rosca de Reyes is a sweet bread with ground sugar and syrup and a caramelized sweet on top.

After you spend your day doing some of our excursions such as whale watching in Cabo San Lucas, Cabo San Lucas kayak tours, or Cabo San Lucas snorkeling tours, make sure to indulge in some of the great holiday food offered in Los Cabos.