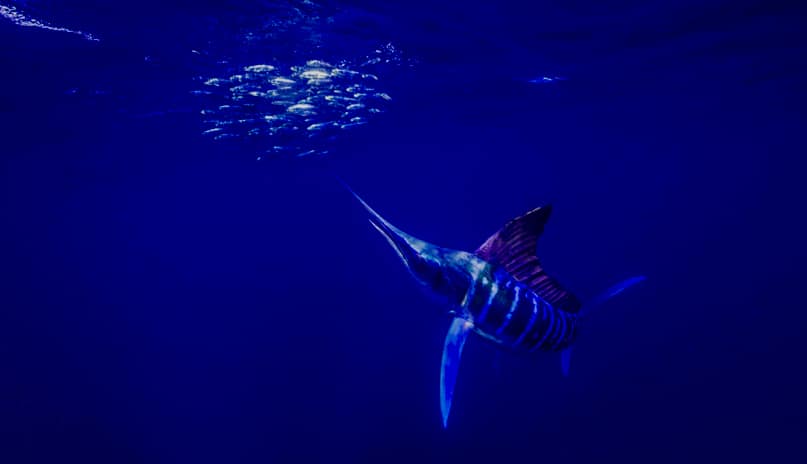 If you’re a fisher, or you’re interested in fishing, then Cabo San Lucas is a great destination for you.  This is because there’s a huge diversity when it comes to marine life in these waters.  In addition, these waters hold a very interesting species; we’re referring to striped marlin.  The reason that Los Cabos is a great place to catch striped marlin is because they are here year-round.  That being said, they are more common from February through August, meaning that this month is a great time to go on a Cabo fishing tour.  In case you’re not familiar with striped marlin, however, we’ve answered some of the common questions about them.

What are striped marlin?

Striped marlin are a species of marlin found in tropical Indo-Pacific oceans, not far from the surface.  This fish is a part of the family known as billfish, which got their name from their upper jaw that extends to look like a spear.  This species can get very big, with a record of 440 pounds in weight and 13.8 feet in length.

Is this a competitive sport?

There are many fishing competitions in Los Cabos!  One of the well-known competitions is called the Los Cabos Billfish Tournament.  During this tournament, fishers not only catch striped marlin, but other species as well.  Even if you’re not competing, it’s a fun event to enjoy.

How do you catch striped marlin?

Catching striped marlin isn’t an easy task, which makes it even more rewarding.  There are different ways to do this, such as slow-trolling live bait, trolling with lures and spreader bars at a faster clip, soaking live baits at 50 to 100 feet, and looking for marlin on the surface.  Don’t worry, although it’s difficult, there are fishing experts that can help during this tour.

Can you eat striped marlin?

Although striped marlin is known for its fishing competitions, it’s not as known for its flavor.  That being said, you can still eat them.  The best way to eat them is by searing them in a hot pan, which can be done in different restaurants around Los Cabos.  That being said, the fish needs to be cared for before being eaten.  This can be done by chilling it while it’s on the boat, rather than letting it sit in the sun all day.

Cabo San Lucas has become a great destination for Cabo fishing tours.  For more information, contact us at Only Cabo Tours.